to help an alien community in the design of a square, the students have created unusual shapes and explained away in space corresponding to their culture geometric, drawing on a mixture of artistic languages ​​and formal and natural landforms. The aim of “Operation: retracing the discovery and invention of regularity that accompanies the development of geometry. 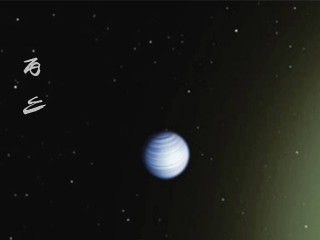 Fig. 7. Provision of “classroom in the lab to the fifth year 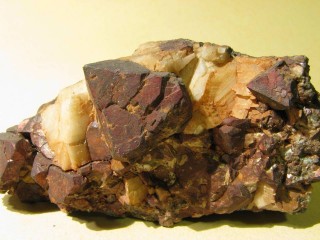 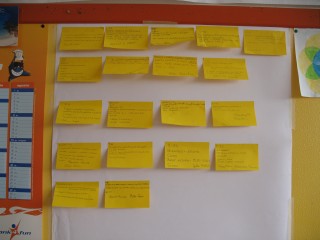 The “activities began with a message containing a request for cooperation. For the fifth class were the inhabitants of a distant planet, near the star Arcturus of Bootes. The people aliens lived with a geometry different from ours, the Euclidean one, and urged the children to rethink our history to be able to transmit them. The narration was accompanied by suggestions picked from various backgrounds (visual arts, geology, dance, architecture, computer graphics) that allowed to take the same meaning describing it in different terms. A common space station represented the space in which to build. A large map in which the track was well Cartesian, but deformed to describe a plot on the edge of a river.

Fig. 11. V Lab – the game board: the square for p51 Arturo Boote Fig. 12. Cards on the board and pieces to identify and reconstruct Fig. 13. Evidence of assembly and placement of the solids in the square

The central space was directly related to the processing space, the bed, on which they worked two pupils and in which objects and figures were in the same scale of the overall project, while the surface part (blackboard more space projection) has been used to present arguments and to amplify and comment on what was happening on the other two surfaces.

Each project ended with the placement of the shapes on the dial and their translation. The people far away in space could not read drawings, so it was necessary to find a code to communicate their configurations. The code was defined with a mixture of free enough positional coordinates, descriptions of figures and geometric transformations, and became the occasion to discuss the process of construction of algorithmic figure.

a series of solids were to be built from pieces scattered on the board along with pictures which described them; the work of identification of the parties, pre-assembly, the location and description in other words forcing the boys to rebuild, translate and compare their performances with already known forms; forms Arthurian followed transformation rules different from the usual, but ritrovabili into works of “art Contemporary or in certain plant structures; Students used these transformations on solid represented in various ways and materials: skeleton in wire “brass, filled with plasticine, cardboard shells.

Fig. 21. Continuity between the figures through increasing side and corner extrusion Fig. 22. Return to the “image from the solid; intuitive redesign Figs. 23, 24, 25. Transformation of solid inspired by a palace Arthurian three to two dimensions

The tools used for the project were selected based on their communication effectiveness, to its availability and ease d ‘use. Where possible learning objects and the support tools were built by students.

Fig. 26. Final assembly on the design of the square Arthurian solids nuts, full and partial dentures Fig. 27. The messages ready to be transmitted to the Arthurian with instructions for the construction and placement of the solids in their place

The evaluation of “experience was carried out in relation to some indicators. The realization of the figures, their position, their translation in the form of algorithm, were elements of evaluation “and acceptance of the” efficacy “s activities. As an opportunity for verification and discussion it was introduced a “business where some students, from message to other companions, had to reconstruct the figure and its location. The errors that emerged were explained, analyzed and adjusted, confirming the important opportunities for consolidation. In addition, the very high level of concentration on the part of children and their high participation during the workshops have represented significant findings. The “positive attitude towards the activities and some geometric skills acquired in relation to the transformation remained far beyond the days of the laboratory.